Hi, if you love my work, please consider donating, all donations gratefully received, thank you!

Damascene moment, first instincts were correct,eg.:
Spiral 3 is officially fantastic!
i thought it it was both hilarious and wonderful and creepy and dark and moody and film-noir and just plain funny tonight..i”m hooked:))

nb.
i’m going with my initial body language assessment of the ‘vibes’ Vs. Berthauld and Gilou which is that i could swear she fancies the proverbial pants off him. Where. woe is Berthauld, he be a bit of a Nethanderthal and has not a clue how she feels i propose? Is he married or with someone, i don’t know?

Gilou being more than gorgeous in a Gerard Depardieu hunky way..in fact most of the male cast is a seriously scenic sea of handsomeness. Almost like the cast of multiple perfume ads escaped from on set and went off for a beer and to put their old comfy T-shirts on!

Yes, it was truly awful the way they treated Ronaldo. Especially as all Police drama watchers know, it’s far too early for him to be the ‘one’ Well it did only just start.

However any outrage at this was more than somewhat tempered by my amusement at his name! Also, the hospital scene where Gilou & Berthauld turn up drunk. Unintentionally or not-i found it hilarious!

Ok, it was dark, however i still found it funny. I wonder if humour is it’s counterpoint to the ongoing horror? Even in the so called civilised law courts there is still dark dealings going on.

Must say my early liking of Lee Van Clint look-alike Roban is growing. Perhaps will forgive his seemingly prurient interest in the Video. Maybe he really was checking the under-age girl’s consent?

Roban does seem extremely serious about his job, as they all do..not withstanding drinking warm beer in the office-shock horror! I missed the opening the beer with his gun but Neathandral Gilou, i rest my case.. Have seen men open beer caps with their teeth, equally as daft and/or butch?

So in spite of his questionable behaviour over the video, Judge Roban did seem to me, like an Avenging Angel figure right from the start. The whole set up with his slightly sinister secretary is surely the ante-chamber to purgatory.?

Seemingly harsh with the grieving parents he is really hell bent on taking the whole dirty system behind their son’s death death down.

BTW best thing about Roban so far for me is how he gets each and every one he does ‘business’ with to sign something? What is that about?!

It’s never explained what these papers requiring signing are about. Unusually, it seems, there is a ‘paper’ for every one of Judge Roban’s encounters in his office! Few people asked even read the thing through before signing! The obviously psychopathic Mayor did.

Also like how the story of the dog in Judge Roban’s manslaughter is threaded through with the mention of a dog in Berthauld’s case.

Great cliche’ gap there by the way as in what other Police Drama, after having a shot would the Detective say “leave the bottle”. Well the occasional hard-boiled world weary man detective does, once in a blue moon…So Berthauld is getting her groove on, finally, even tho she has the wrong man.

nb. does anybody else feel like Ghostbusters might be arriving any minute due to the blue light problem?
The blue light bathing all does give it a lovely film-noir feel.whilst usefully supplying Gothic backdrop horror lighting at the drop of a hat This lighting also works in the Hospital and cell interrogation scenes with Berthauld and Gilou, giving a surreal and sinister air to Ronaldo’s internment.

Did anybody else find it shocking that Ronaldo appeared to be in the Hospital briefly and then walked up the Hospital corridor to a prison? Was the prison in the Hospital? It was confusing and a little rendition like..

Possibly it’s all meant to be a slightly cartoonish dark caricature whilst being ‘hard hitting and ‘gritty too? i’m quite liking the humour inherent in it-i think? i’m hooked, from here on in..

Hi all, like some of you have come to Spiral straight after The Killing. Spiral, unfairly perhaps as it is a different genre really even tho it’s a ‘Cop Procedural’ has a very hard act to follow.

Only dipped into Spiral before, not sure what numbers, briefly and was put off by the goriness although entranced by the overall ‘chic’ of the sets: incredible lamps, ‘retro’ furnishings, the gorgeous buildings of the law offices and of course mostly everybody’s supreme good looks.

The only thing i remember that i enjoyed previously was the stand out line:

“yes, we have the best collection on Phalluses in the world”! quite obviously a one off line, i propose, in the history of cinema and i found, very funny too..:)

That too, was a gory case and i remember clearly that it was the Van Klint look alike white moustachioed one who was at some couple’s darkly lit farmhouse examining aforesaid collection on a their mantle piece!..

The thing i remember liking about it was the presence of older people in it with white hair and still
a) working b) in the thing to start with and c) not being patronised in any way for their age and utilising both their obvious intelligence and wealth of experience
oh and d) not being necessarily ‘quirky’ and or restricted to a back room somewhere..

My first thoughts on watching it last night was “it’s officially fantastic” and i loved the murky monochrome blue/grey light bathing all, evoking, i felt the 60’s or even the 50’s..I should declare perhaps a penchant for spoken French and once, very long time ago, fluency in Parisien French (and very happy memories of living and working there as a young nanny for a while whilst learning it-on the Boulevard St.Germain-can you believe?!)

For me, unlike @Peckham On Rye, French sounds fabulously ‘cool’, i love the sound of it and it doesn’t remind me of exams, thank goodness:) So being that anything they say sounds necessarily brilliant to me, cool, chic AND sexy i am somewhat prejudiced in favour of anything in French to start with!

I do agree with @Zozitufnel wholeheartedly and it’s great to hear somebody else say it as i feel exactly the same way: why does it always have to be the horrible abuse and torture of some young girl (is it me or are the victims getting younger and younger?) then murdered, then shown in horrible graphic detail. Oh and having been tortured and all the rest, held somewhere (usually a hideous/underground/basement/hospital set up even) for days and days?

I thought “this stuff is sick, i’m watching it, i’ve been ‘sold’ somehow into watching it for the ‘psychological interest’ supposedly, but there really isn’t much of that is there? it’s mainly the visuals..(consistently ‘flash backed’ or presented amongst the serious Profiling scenes..)

I decided to stop watching such stuff-BTW it’s never a man, is it? why is that? not that i’m wishing it on any fictional character:)
So i did gave The Killing a try since it hardly had any such full on relentlessly visual horror i still have that “uurrghh” reflex and agree that it’s harder to read subtitles when you’re hiding your eyes!:)

So i agree with @Highfidelity too, i could have done without such graphic scenes of the body too. I found myself wondering if they had really done that to a dead body or was it some really amazing specialised artist mock-up? I had recently read an article about such a guy who provides lifelike mannequins for films and training medical staff so hopefully, yes, a state of the art special effects illusion..

I would agree tho, that there is humour, whether intentional or unintentional in it..the line from the Pathologist as she robot-like intoned the details starting with:

“a very fine circular saw was used” was, darkly funny to me..it was like the trump out of all autopsies!

The common storyline as @PeckamuponRye says:

the 2 women, tho missed the jumper connection?

the involvement of a nightclub, a paedophile etc is a good point but i would propose it to be so common now so becoming a cliche’ & therefore free from blame of copying from another series perhaps?

These same themes having been present in Special Victims Unit from the Law & Order series..also the pathologists could be said to be the same..worryingly, for me, the pathologist in CSI Miami would get all sympathetic &cuddle the bodies, which was a little darker than intended..
nb. cool jingly accordion intermittent background music:) 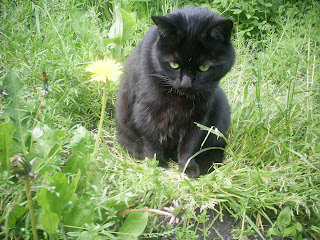 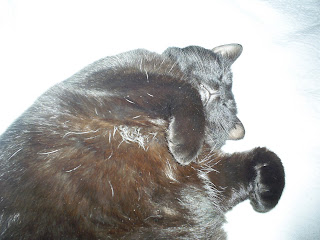 This is Miss Moneypenny, she is a rather rotund feline who very occasionally munches on mice. SGT

This is my blog (obviously).